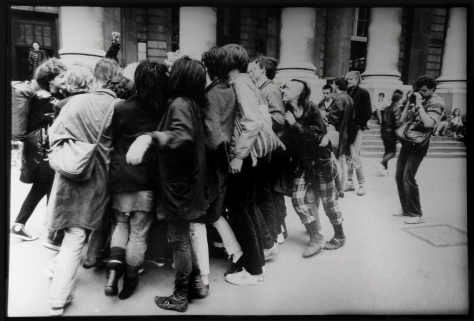 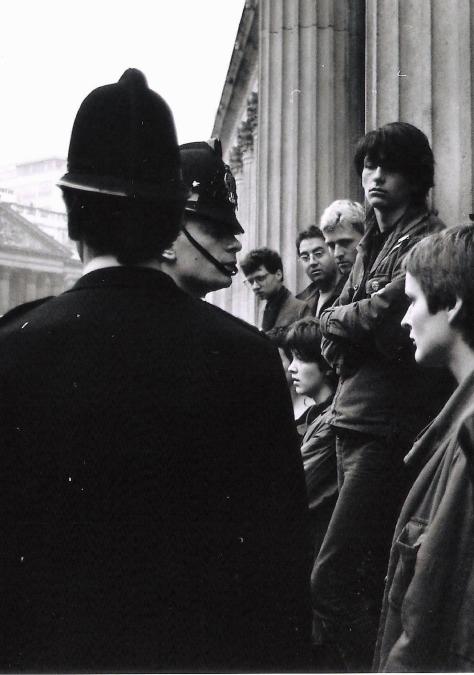 Another image from the first Stop the City protest in the early eighties. I find it very strange to look at this picture as I almost feel that it isn’t mine. But it’s there on the contact sheet, there on the strip of negs and now here. Unlike a lot of the other pictures from that day there is a palpable sense of threat in this image, a sense of seriousness and confrontation. I do remember feeling uneasy that day – treated as suspect by the police and the protesters and the passers by. Back then with no CCTV cameras recording everything, with hardly anyone having a camera on them, the question of exactly who was taking photographs and for what purpose was an enormous issue.
As I didn’t have a long lens I must have got very close to this scene, and yet none of the people in this drama seem aware of my presence – no one is looking at the camera. No one sees me. 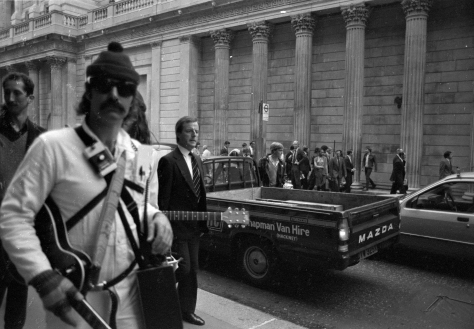 This is another photograph taken during the first Stop the City Demonstration in 1983. Although many of the demonstrators had dressed in elaborate costume and were there to be seen, there was some animosity directed towards me and my camera. People suspected I was taking photographs for the police instead of the ecological magazine I worked for. In some ways any record of protest at that time, whether it was just a story in the press or otherwise would have the same effect in the sense that people’s images were there for anyone to see and use in any way.

Another shot from the Stop the City protest in the early eighties. The strange thing about this is the businessman’s smile contrasted with the range of expressions on the protesters’ faces.

This picture was taken outside the Bank of England in the City of London during the first Stop the City demonstration on 29th September 1983. The protest took the form of a street invasion or agitprop performance. The baby crawling free and seemingly unsupervised was a remarkable sight in the streets of the financial centre of London.